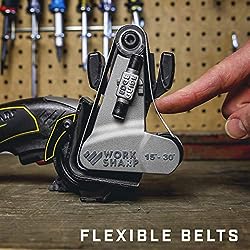 As much as we loved to keep all knives sharp, the time will come to sharpen it after repeat uses. Work Sharp belts are strong and durable to last a hundred times before a replacement is needed.

While this is true, it also depends on the usage and the conditions of the knives.

So, what type of belt is needed also depends on your requirement and preference.

Do you frequently use coarse belt to sharpen the edge or the highest grit belt to hone the knife? It doesn’t matter, since there are plenty of work sharp replacement belts and individual belt available for purchase.

And it’s cheap. There is no reason not to get it replaced. But there are many different replacement belts for different models althought it looks the same.

Do not buy the wrong belt and end up doesn’t fit the correct model. It’s a waste of money. Although you could easily return to the merchant and get it replaced. Why not get it done right the first time?

In this article, we’ll list out the types of belts for each model, safety advice and the recommendation as needed. So you’ll always choose the right type of Work Sharp replacement belts for the different Work Sharp Sharpeners you own. 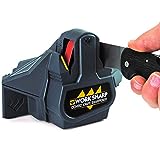 The Work Sharp Combo Knife Sharpener comes with two 3M flexible abrasive belts – ½ x 10 inches. This is the only coarse grinding belt (P120) for use in this sharpener. Price-wise, it’s the cheapest belts among all the models.

This durable flexible belt is manufactured by Norton Abrasives. This is the same belt use by professional sharpening services and knife makers. It has unique cool cutting characteristics that will not alter the blade temper. It’s very affordable and reliable, too.

The belt replacement kit (model WSCMB) consists of 3 individual belts. For just a few dollars, you can easily buy it on Amazon.

Dream of using the Combo Knife Sharpener for medium and fine honing?

As we know, the Combo Knife Sharpener comes with only the P120 grit belt. Maybe Work Sharp thinks that this simple sharpening machine does not require honing, one belt does it all.

Fortunately, there are some Work Sharp aftermarket belts available on the market.

One of the manufacturers is Red Label Abrasives. You may takes advantage of this opportunity to include more grits to test out the results against the original Work Sharp belts.

It’s also available on Amazon and still considered affordable with a pack of ten belts.

The pack consists of:

The coarse and fine grits are made of premium aluminum oxide and the ultra-fine grit is made of ceramic. It’s a piece of good news for the knife enthusiasts as they will have more belts to play with, thus sharper and smoother edge.

Some folks prefer to cut with ceramic knife. Unfortunately, there is no diamond abrasive belt available for this model, not even from Red Label Abrasives. Nonetheless, it’s still a blessing as there are different grit belts for replacement.

For people who also use ceramic knives at home may consider buying the Knife and Tool Sharpener instead of the Combo unit. With just an extra diamond belt you can include it in your ceramic knife sharpening routine. (see below)

Due to the fact that ceramics is about four times stronger than steel, only diamond belt can sharpen ceramic blade. 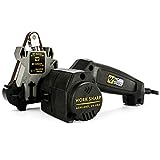 This powerful and versatile sharpener is the first portable sharpening device by Work Sharp. It generously includes 6 abrasive belts, two each from coarse, medium, and fine grits.

Don’t ever think to use these belts on the Combo sharpener because it does not fit. It has the same width but it is 2 inches longer than the Combo belts. The belts with different grits are represented in different colors.

The belts of ½ x 12 inches come with different grits:

Different grits are made from different materials. The P80 grit is made of aluminum oxide, ceramic oxide for P220, and silicon carbide for the 6000 grits.

Of all the three types, Norton Abrasives manufactures P80 and P220 grit while the belt for 6000 grit is manufactured by Micro-Mesh. Both are reputable suppliers for Darex Inc. (Work Sharp Company) so we’re very confident of the quality. 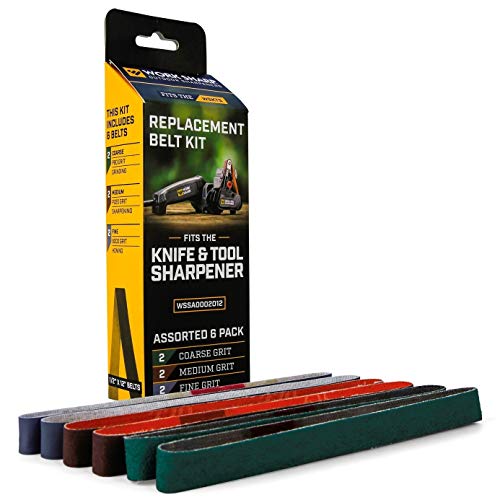 The WSKTS is a powerful tool with super strong addicted power. If you’re a knife enthusiast, you may quickly wear out the belts.

You can buy the complete replacement belt kit which includes 2 of each of the different grits – extra-coarse, medium, and fine grit. That’s what it is included when you purchase the sharpener.

There are times when you use certain belts too often and only need to replace one or two belts. It’s economical to do it this way and save a few bucks.

To sharpen ceramic knives, select the diamond belts below:

The above belt replacement kits are original belts sold by Work Sharp. And we’re very confident Work Sharp products are the best in the market when it comes to high quality and versatile kitchen knife sharpener.

Some people experienced compatibility issues with the WSKTS but some have good remarks. Please read the reviews thoroughly before making a purchase.

Work Sharp tools are so popular that also invited some other companies to share the pie.

It can be a direct replacement of the Work Sharp 6000 grit belt for honing the knives. As usual, read the reviews first.

Before you consider the aftermarket belts, ask yourself a question.

After all these efforts to save a few bucks, is it worth to take the risk?

We’re pretty sure the official Work Sharp belts will fit perfectly well and work with no issues at all. 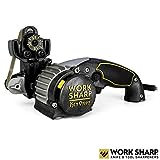 Now, here comes the upgrade model of the original Knife and Tool Sharpener. The Ken Onion Edition Sharpener comes with 5 abrasive belts together with the device.

The belts of ¾  x 12 inches come with different grits:

And these belts are exclusively use for the Ken Onion Edition Sharpener. It’s not interchangeable with other models except for the ½” wide (6000 grit) belt which is common to the original Work Sharp Knife & Tool Sharpener. 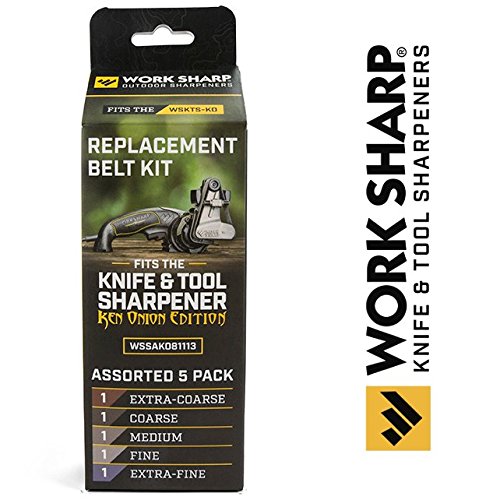 The original Replacement Belt Kits are:

The Ken Onion Edition ¾” belts are more expensive than the ½” belts but you get more sharpening power.

In the case to repair ceramic knives, you can also buy the same belt for the original knife sharpener. 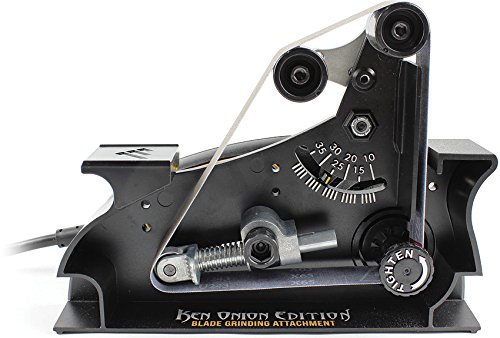 Now, it gets a little complicated if you also have the blade grinder. If you examine the belts carefully, it looks very similar to the Ken Onion belts but it is 1″ x 18″. Ken Onion belts are ¾”  x 12″. Do not use the wrong belt.

For extreme stropping and polishing you need the cloth belt much like a leather belt.

The Ken Onion Edition Sharpener has an option for light-duty grinding. The Tool Grinding Attachment does just that. The P60 extra-coarse belt looks similar to the belt use for the original Knife and Tool Sharpener and has the same size – ¾” x 10”.

This session pretty much summed up all the replacement belt kits for the Ken Onion Edition and the attachments.

Let’s move on to the workbench grinder.

There are a total of 11 abrasive discs for a complete range of sharpening.

The WS3000 Solid Abrasive Discs include:

Since Work Sharp sharpeners are so popular, Amazon has a lot of stock.

The abrasive discs cannot be used for other sharpeners due to different design but if you have the Belt Sharpening System Attachment for knives (optional) for the WS3000, you can actually use the belts (1” x 18”) from the Ken Onion Edition Blade Grinder except for the ½” wide (6000 grit) belt.

Let’s proceed to the last part of this session – the Automatic Knife Sharpener. 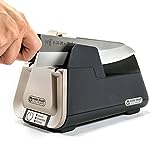 One of a kind, the Culinary E5 is a pre-programmed knife sharpener with a fully automatic function to restore knives at 17° angle. For this angle, you’ll only need the Red P120 Medium belt. This is the belt that is pre-installed at factory before delivery.

Simple enough, it seems there is not much choice to play around using different grits. That means one belt does it all.

Strange but it’s true, this model has received very good reviews from the consumers although it depends on one medium belt for the whole sharpening process.

The Medium belt P120 (¾” x 12”) is the same belt use for Ken Onion Edition, and manufactured by the same company, Norton Abrasives. If that’s the case, we believe this belt can also be used for other sharpeners if it fits well.

To buy the Medium belt P120 on Amazon, look for:

This replacement belt kit contains 3 of P120 belts. This should be able to last a long time.

This machine is not limited to 17° only. The Culinary E5 has an upgrade kit which can sharpen 15° and 20° of angles. The East and West Guides upgrade kit also comes with various belts to sharpen knives at different angle, including the P120.

Of all these belts, the Blue P120ZA belt is to be used only with the 20° West sharpening guides. Do not mistaken the P120 is the same as P120ZA. Any misuse with the wrong guides will cause striations on the face of the blade.

If you’ve worn out the belts, get the Master Replacement Belt Kit below:

It includes every belt that comes with the upgrade kit.

To maintain the efficiency of the sharpener for the long haul, getting the replacement belt kit at hand is a must. Different sharpeners come with different belts and it looks very similar. So, make sure you buy the exact belts to reduce the risk of damaging the sharpener.

But some models can share the same belts with other sharpeners. This will never happen unless you have both sharpeners that also use the same type.

Chosenz.com is a participant in the Amazon Services LLC Associates Program, an affiliate advertising program designed to provide a means for sites to earn advertising fees by advertising and linking to Amazon.com, Amazon.co.uk or Amazon.ca.

As an Amazon Associate I earn from qualifying purchases.

Scroll back to top